The 2018 model marked the mid-point of Apple’s all-Thunderbolt MacBook Pro models. So while Apple Silicon outperforms the then high-end configuration, what’s the verdict on the model after three consecutive years of daily toil?

After four years of problems with my 2012 Retina MacBook Pro, including a rather spectacular and repeated keyboard failure, I was an early adopter of the 2016 15-inch MacBook Pro. The Thunderbolt 3 life, with Apple’s ultimate realization of “one cable to rule them all” it had been trying since the HDI-45 days, was appealing.

That honeymoon lasted for about a year. It was a good computer, but the combination of heat, fan noise, and the keyboard told me that it was time for me to move on. I didn’t feed it into a woodchopper or anything similar — it’s presently being used by a family member after a couple of keyboard replacements.

So, instead, I upgraded to the 2018 i9 MacBook Pro that AppleInsider bought for review. My configuration at purchase was the i9 processor running at 2.9GHz with a “turbo” speed of up to 4.8GHz, the Radeon 560X discrete GPU, 512GB of storage, 32GB of DDR4 RAM — and it obviously has the same storage and RAM today given that neither the RAM nor the Flash storage are slotted.

The whole point of the 2017 MacBook Pro refresh was the addition of Kaby Lake. The 2018 advanced that a bit farther with Coffee Lake and DDR4 RAM in the 15-inch model. But, of course, that’s old news for Mac users, considering the shift to M1.

Turning to the ever-useful Geekbench for benchmark scores, it’s obvious to see that since the 2018 debut, Apple has undoubtedly pumped up Mac performance with Apple Silicon, and in a few different ways.

The Core i9 doesn’t fare much better in Multi-Core testing, with its six cores managing 4,959. Meanwhile, the M1’s 8-core processor stretches its muscles with 7,379, almost 50% better than its Intel counterpart.

This, of course, relies on native software and is just a generalization. That said, even Adobe has jumped on board, so unless you’ve got something in a particular vertical, you’re probably good in that regard at this point.

Time has been somewhat kinder to the 2018 model on the graphics side of things.

While it was available, you could configure it with the base-level Radeon Pro 560X GPU with 4GB of GDDR5 memory or upgrade to the Radeon Pro Vega 16 or Radeon Pro Vega 20 with 4GB of HBM2 memory each. All options included the integrated Intel UHD Graphics 630, which helped preserve battery power. 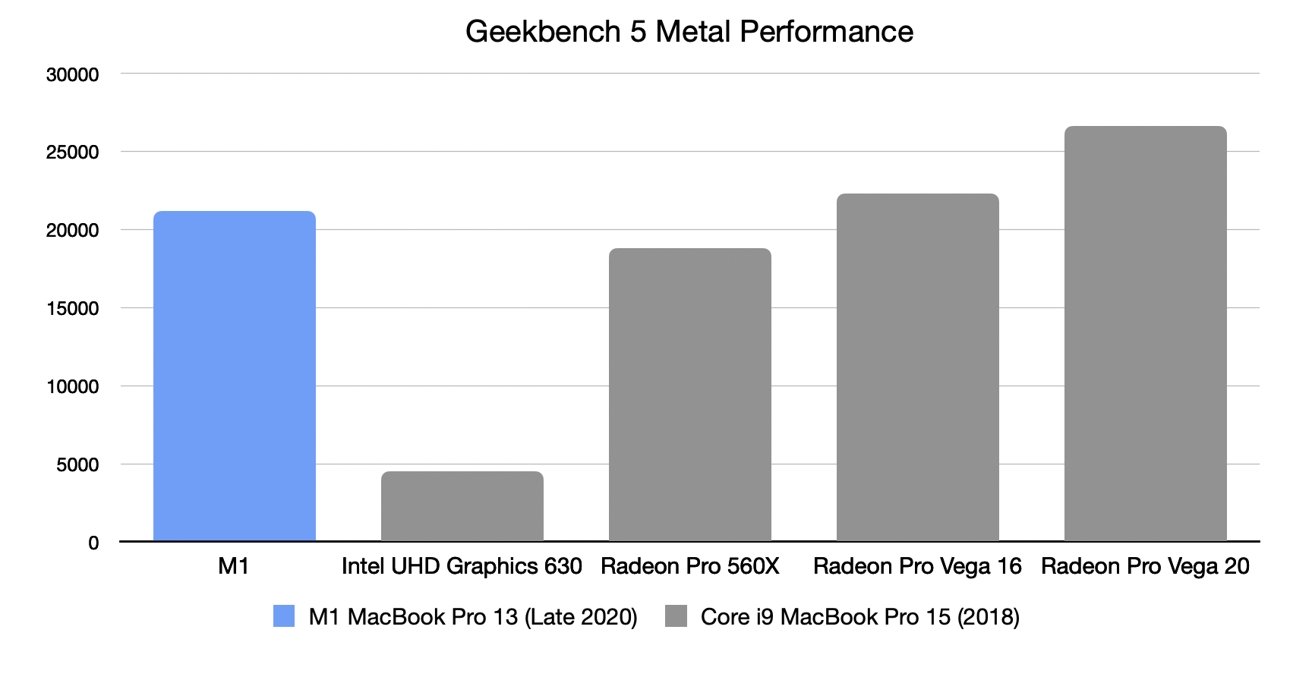 Naturally, the Intel integrated graphics is bottom of the table at 4,501, though again, its use is less about performance and about extending the usability time. That being said, it’s striking to see the 4.7-times increase between the two integrated graphics options, as it shows how far Apple’s come with its own designs.

And, this doesn’t even address external displays. One glorious evening, I had five displays attached to my MacBook Pro, including one iPad Pro connected with SideCar. Good luck doing that with Apple Silicon, at least in August 2021.

Let’s be clear about the term “thermal throttling.” It defines what a processor does to maintain itself in its thermal envelope while under load — it dials down the operating frequency, which then, in turn, cuts back on the heat that the processor is generating.

“Thermal throttling” is not inherently bad and is perfectly normal and expected behavior for any CPU. The only time that it’s abnormal is when the processor in the computer drops under the rated speed of the processor, which for the 2018 i9 MacBook Pro is 2.9 GHz.

To make a long story short, back at release, Apple had what it called a flaw in the computer’s thermal management software. As a result, under load, the 2018 i7 and i9 MacBook Pros would throttle down to well under the system’s rated speed.

YouTuber Dave Lee was the first to discover the issue. We reproduced it using the new at the time Cinebench 15. Immediately after starting the first test, the CPU clock speed shot up to 4.17 GHz. After that, it rapidly dropped to 3.86GHz until it hit the chip critical temperature of 100C. It then dropped nearly immediately to 2.57GHz with a temperature drop to 84C.

The processor’s speed varied between 2.33GHz and 2.9GHz during the test, with one profound dip to 2.02GHz. The first time we ran the test, we got a 921 on the Cinebench test. The second run through, it scored an 877, with an average across the ten trials of 906.

The week after release, Apple issued a patch.

“Following extensive performance testing under numerous workloads, we’ve identified that there is a missing digital key in the firmware that impacts the thermal management system and could drive clock speeds down under heavy thermal loads on the new MacBook Pro,” noted an Apple spokesperson at the time. “A bug fix is included in today’s macOS High Sierra 10.13.6 Supplemental Update and is recommended.”

Following the update, we repeated the same Cinebench test on the MacBook Pro with a Core i9 processor under the same conditions and the same ambient temperature. The first run of the test hit 953, with a 10-run average of 945. Clock speeds remained high, with only very brief excursions below rated speed.

During the second round of testing, the 3.5GHz speed was maintained in this same Core i9 machine, with most of the speed excursions only went down to 3.1GHz.

And, for laughs on Monday morning, I repeated the test using the out-of-date Cinebench version. Again, I got much the same results as the post-patch testing, with a 10-run average of 951, the same 3.5Ghz speed maintenance, and a 3.1Ghz minimum.

We still don’t know what Apple specifically altered, beyond the “missing digital key” that it spoke about in the statement at the time. But, in the last three years, the problem never cropped up again, so the fix obviously stuck.

My workflows are bursty — meaning very few long, continuous processing loads are put on it. I saved those for my first Intel and now do them on my M1 Mac mini.

The infamous butterfly keyboard and the Touch Bar

After a year of consumer complaints about the keyboard, Apple added a silicone barrier that it said was to keep the machine quiet. In practice, this membrane helps prevent the tiniest bits of dust from entering the sensitive internal mechanism but doesn’t completely solve it.

We said in our first review that the keyboard was about the same as the 2016, with a slightly stiffer (and quieter) key action. We were wondering if it would soften with time — and so far, it has not yet done so.

Since 2018, I put about half the words I write on the keyboard integral to the MacBook Pro and half on various wireless external keyboards over the years. I have yet to see the keyboard failure or stuck keys. In the same time period, the 2016 MacBook Pro I mentioned above has seen it twice.

And, as it pertains to longevity and reliability, we’re still collecting that failure data on the keyboards and overall survivability. While we’re not going to beat the drum too profoundly here because we have done so before, the overall failure rates in the first three years of ownership of the 2012 redesign and the 2018 MacBook Pro are comparable. Through the first three years of ownership, the 2018 has a slightly lower overall failure rate than the 2012 though 2015 models, and the 2016 model is a very slightly higher one.

Of these failures, about a third of all the repairs are the keyboard on the 2018 model, with a bit more on the 2016. About a quarter of the 2012 through 2015 models are keyboard failures as well.

The repair program on the 2016 MacBook Pro keyboard is effectively expired. The 2018 has at least a year left, and perhaps more if you bought it later in the model’s life.

At my desk, I use the Elgato Stream Deck for a number of invocations for my day-to-day workflows, which are out of the scope of this examination. When on the go, I use BetterTouchTool to customize it — but without those customizations, it’s not of much value to me.

But for that matter, neither are Function Keys.

Apple’s aluminum cases wear pretty well. However, I’ve got a couple of what appear to be permanent discolorations here and there from unknown causes. Well, mostly unknown — the provenance of the ring around the Touch ID sensor is pretty clear.

I haven’t done much to it to keep it clean. However, a periodic wipe-down with a damp cloth has done the trick. I’ve not yet experienced any Retina display delamination on this or any other machine, and finger-oil transfer to the screen has been minor and easily solved with the wipe-down.

I have some minor dings around the Thunderbolt ports, but that’s to be expected given the plug-in, disconnect, plug-in cadence of the workday.

And, as a reminder, some of the most considerable crud accumulation is inside a machine on the fan’s blades. Lately, I’ve been removing the back panel with a Torx screwdriver set and removing a surprising amount of sticky grey dust accumulated on the blades with a dry Q-tip.

Apple says that the battery in the 2018 MacBook Pro is good for about 1000 cycles. I’m up to 554 after three solid years of work. Many of the battery-saving routines were introduced after the initial release of the 2018 MacBook Pro, but I’m still guessing I’ve got about two years left of operational life on it, assuming I don’t need to get the keyboard replaced in the next year.

AppleInsider is not a hobby. Part and parcel of the gig is staying on top of the new hardware. Beyond purchasing hardware for review since we don’t get loaners from Apple despite being on this beat since the late ’90s, we need the gear to make sure that we know what we’re talking about and know the ins and outs of the products to talk intelligently about them.

Had we not purchased the gear and relied on hypothetical loaners, we’d not have known about the thermal issues at launch and not been able to test the patch. After that very early firmware patch fixing the thermals, this machine has enough grunt for everything I need it for. In addition, it has the long-term reliability that folks attribute solely to the 2012 through 2015 models and will likely tide me over personally for a few more years.

And, the creative and enterprise folks that I’ve spoken to about the other 15-inch 2018 MacBook Pro are of the same mind as it pertains to hanging on to the model. Given Intel’s repeated “tock” instead of “tick-tock,” the 2018 models for folks with sterner hardware requirements than my own are seeing very similar performance to the last of Intel Mac hardware. Plus, the gear on hand has the advantage of being purchased several years ago, amortizing the cost over the years at this point.

The times, they are a-changin’, though. Instead of the top of the heap for portable workstations, the day is rapidly approaching where Apple Silicon at the low-end will even more dramatically leapfrog these once high-end workstations instead of the inching that we’ve seen for the last two years under Intel’s yoke. For most, that will be the time to upgrade to whatever is at the higher-end, which we’re expecting to see at least the start of at the end of 2021.

But for me, there’s no real point. Even with M1 in the house for computing grunt, I will fly this computer, my main writing station, right into the ground, rather than handing it down and upgrading mid-life.

And, three years later, I refuse to give it X out of 5 stars, Google be damned. There are enough variables between users, that a very difficult task in assigning a universal rating for a new product is made impossible considering all the factors that need to be weighed if a three-year-old computer is worth it to any given user.

Apple Watch Series 6 long-term review — Was it worth upgrading?