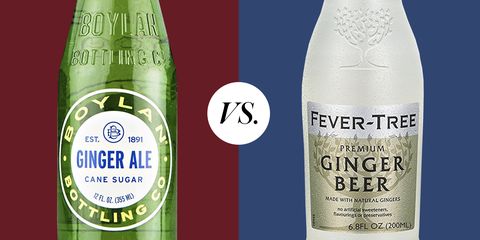 If you like having a drink with a bit of a kick, you might be a fan of ginger ale’s slightly spicier cousin, ginger beer. While both are non-alcoholic soft drinks, ginger beer and ginger ale are mainly different in that ginger beer is spicier, with a more robust flavor than ginger ale. Also, while ginger ale is generally treated as a tame alternative to alcohol or soda, ginger beer’s flavor makes it easy to enjoy on its own or mixed in a cocktail—like the traditional Dark n’ Stormy or even a sangria.

Where is it from?

Despite it being marketed as a typically non-alcoholic drink nowadays, ginger beer’s name isn’t a complete misnomer. Traditional ginger beer originated in England in the mid 1800s and was a product of fermenting and brewing ginger with water and sugar, resulting in a drink with about 11 percent alcohol, according to thekitchn.com.

Modern ginger beer is not fermented, but is instead carbonated, making it a soft drink. This ginger beer typically contains less than .5 percent alcohol, and is not classified as an alcoholic beverage.

How is it made?

So, while ginger beer and ginger ale can be used interchangeably, it’s important to remember that ginger beer does have a stronger flavor.

What flavors can you try?

Ginger ale comes in a variety of flavors, including: green tea, blackberry, cranberry, black cherry, pomegranate, and even peach.

Ginger beer sticks to a more citrusy flavors such as lemon, lime, and pineapple.

What cocktails can you make?

Full of spice, zest, and sweetness, the flavor profile of ginger beer mixes well with a variety of different cocktails. The flavor of the ginger beer manages to stand out in any cocktail, from the traditional Moscow Mule to a ginger and apple cooler with a splash of maple syrup, or even a blood orange and tequila cocktail.

What are the best brands?

Who Was Uncle Dickie in ‘The Crown’?