Auras are common to all of us. The only difference is the color with which it is painted.

In fact, your aura color changes depending on who you are, how you think, and what you feel.

In this article, we will explore the amazing traits and meanings of the orange aura.

An important thing to keep in mind is that the color of your aura depends more on the most prominent experiences that you have than on the fluctuating ones.

It doesn’t change in specific situations and moments, it is actually quite consistent across time.

Nonetheless, the shade of your aura does vary throughout your life.

After all, you’re not the same person you were ten years before today, and the variety of your thoughts and emotions are also probably very different.

Eventually, this change will also be reflected in your aura.

To be sure, your aura’s color reflects who you are, nine times out of ten. And there’s so much to be learned from this.

But let’s take it one step at a time, and focus on one specific color and its variants: the orange aura.

But before breaking down the complexities of the orange aura, a question might still loom in the back of your head:

What on earth do we mean when we talk about auras?

Understanding What An Aura Is

Basically, an aura is an oval field of energy that surrounds the physical body of each and every being.

It is the subtle body that englobes your physical frame, and in fact, one wouldn’t exist without the other.

One thing about auras is that you cannot really perceive them, truth be told. This ability can be trained, however.

There’s even a special type of photography that can help you discern the colors of your aura -it’s called Kirlian photography (you can look it up!).

But even though auras might be invisible, they are much more useful and impactful in our everyday lives than we think.

How often have you met someone, and formed an instant impression about them as a person?

How can we automatically jump to such a conclusion, without even talking?

Well, remember that auras are larger than material bodies. They are the main source of this first impression.

There will always be an energetic exchange between two people that are next to one another. Your aura already introduces you to the other person, and this process goes for both sides.

One important thing to consider is that auras come in a wide variety of colors.

This coloration is directly influenced by who the person is and how he lives his life.

Think of it as the part of you that’s always an open book, as it reflects your inner and outer worlds.

I’m sure that you’ve already come across a highly intelligent and intuitive person, who might give you the impression of exhibiting an intriguing purple aura.

Somebody else might be an especially grounded, confident, and physically strong individual, who exudes a fervent red aura.

In short, the prevailing psychological and emotional states of a person, as well as his health, lifestyle, and spiritual development, all contribute to decorating the corresponding aura with a specific hue.

With a better understanding of auras in mind, the time has come to dive deeper into the shades of the orange aura.

Thanks to it, much information can be gained for your self-understanding and your awareness of others.

Chakras And The Spiritual Significance Of The Orange Aura

The second chakra, which is located a few centimeters below your belly button, has an orange tint.

It is especially relevant to consider this chakra since an orange aura would reflect a high energetic potency within it, which would then tell us more about the spiritual meaning of this aura color.

The second energetic center also called a sacral chakra, is related to the digestive tract, kidneys, and reproductive organs.

It is the chakra point that deals with transforming food into actual energy and generating libido and sexual desire. As such, it is highly relevant for vitality, vigor, and liveliness.

The sacral chakra is right between the root (first) chakra and the solar plexus (third) chakra.

It is the middle ground between passion and joy, respectively, which implies that the second chakra has a tight affinity with pleasure and enjoyment.

Since this energy center is located at the lower areas of the body, it contributes to carrying the vital force upwards, towards higher parts.

As such, a person with an orange aura has a more natural and instinctive way of undertaking his/her own spiritual path, and is manifested in being one’s true self.

An orange aura entails an ability to engage in effortless actions.

Oftentimes, it denotes a spirituality that works through spontaneity and visceral feelings.

For such individuals, peace and harmony are found by connecting to the active flow of life, and by trusting in the playfulness of the universe.

Personality Traits Of Someone With An Orange Aura

An orange aura comes with specific character traits that emerge most often than not.

In many instances, people with an orange aura tend to have lots of energy, and they certainly act like it.

They are often very active people, who won’t shy away from doing what others fear. As such, they’re often appreciated by their peers for their vibrant and flirtatious personalities.

Since their energy levels never seem to deplete, they also tend to love the excitement of thrilling situations.

This translates into courage and perseverance, which is highly adaptive when facing problems.

Thanks to this, they can be seen as strong and resilient leads.

However, they can also sometimes seek unnecessary dangers to fulfill their need for adrenaline, which can be dangerous.

Creativity is another precious quality that orange aura people hold.

This is related to their high sexual energy since they’re able to channel it into their inventive endeavors.

In fact, transmuting their libido comes easily and naturally for them. Their reservoir of inspiration never empties out.

They might express it through their sexuality, arts, sports, and relationships with significant others. On the downside, they might be more prone to addictive tendencies, whether for substances or for people.

The Shades of the Orange Aura and Their Meanings

This aura color is the purest of all orange auras. It has all the true qualities attached to it.

This implies a strong vital force, a spontaneous personality, and lots of energy and creativity. A developed intelligence is also very common.

People with tangerine auras have a natural way with people, and they are generally liked and appreciated wherever they are.

Their enthusiasm helps lighten up the mood of those around them, and their ability to motivate others can truly be inspiring.

The tangerine shade makes for strong leaders that can face adversity in a clever, innovative, and time-efficient manner.

People trust them and want to rely on them if they have a problem.

In the workplace, they would give rise to excellent managers and higher-order positions supervising others.

This shade mixes attributes of the red aura with the now-familiar qualities of orange auras.

On top of the natural way with people that they have, thanks to their enthusiasm, the reddish aspect involves a soothing, grounded energy, which gives birth to very charismatic individuals.

The people surrounding someone with a red-orange aura usually look up to them and would like to be like them.

They often serve as a role model thanks to the powerful and confident energy they emanate, which naturally calls up for respect and consideration.

Because of these qualities, the red-orange aura make the best leaders.

They are able to be assertive, and yet their remain appreciated by their followers.

Career-wise, they are generally promised a great future. They can climb up the ladders of corporations with ease, eventually allowing them to achieve highly regarded executive positions.

This shade of the orange aura is associated with more enthusiasm, joyfulness, and light-heartedness.

They are usually the life of the party and the center of everybody’s attention.

Whoever they meet will be drawn to their happy energy like a magnet, and their charm can cast spells on others.

On top of this, they tend to be highly intelligent, optimistic, and ambitious people, who seek a higher purpose out of life.

They can be very inspirational, and their persuasion skills are unmatched.

People with an orange-yellow aura can also excel in their careers, but won’t chase the corporate world because of their more noble aspirations.

In fact, they would give rise to excellent professors and/or scientists, as their high intelligence and childlike interest in things and people truly facilitate discovering and transmitting complex information.

A darker shade is usually associated with negative energy and tendencies.

People with such an aura coloration might have issues with their sacral chakra, which is mainly blocked by fear and anger.

People with a brownish-orange aura might have a tough time dealing with their ambitions or resent not being able to fulfill them, which might indicate that they are in desperate need of a new and different adventure in life.

Since the orange aura is associated with high energy levels and lots of activity, a darker shade might also reflect lethargy and dullness in everyday life.

An unhealthy lifestyle might underlie the presence of this hue as well. People with this tint would gain in focusing on action and creating movement in their lives.

They are bright and enthusiastic, creative and driven. They have high levels of energy and love to engage in pleasurable activities.

Their spirituality is rooted in spontaneity and instinctive actions, which makes it enjoyable to be around them.

When the shade of orange is reddish, the person exudes confidence and is naturally respected by others.

If it leans towards the yellow side, it reflects higher intelligence, purposefulness, and joy. A darker shade is less positive, as it means that the person is struggling and is in need for a change.

Thank you! I hope you enjoyed learning about the meaning of the orange aura.

❤️ To learn about the meaning of the other aura colors check out the following articles: 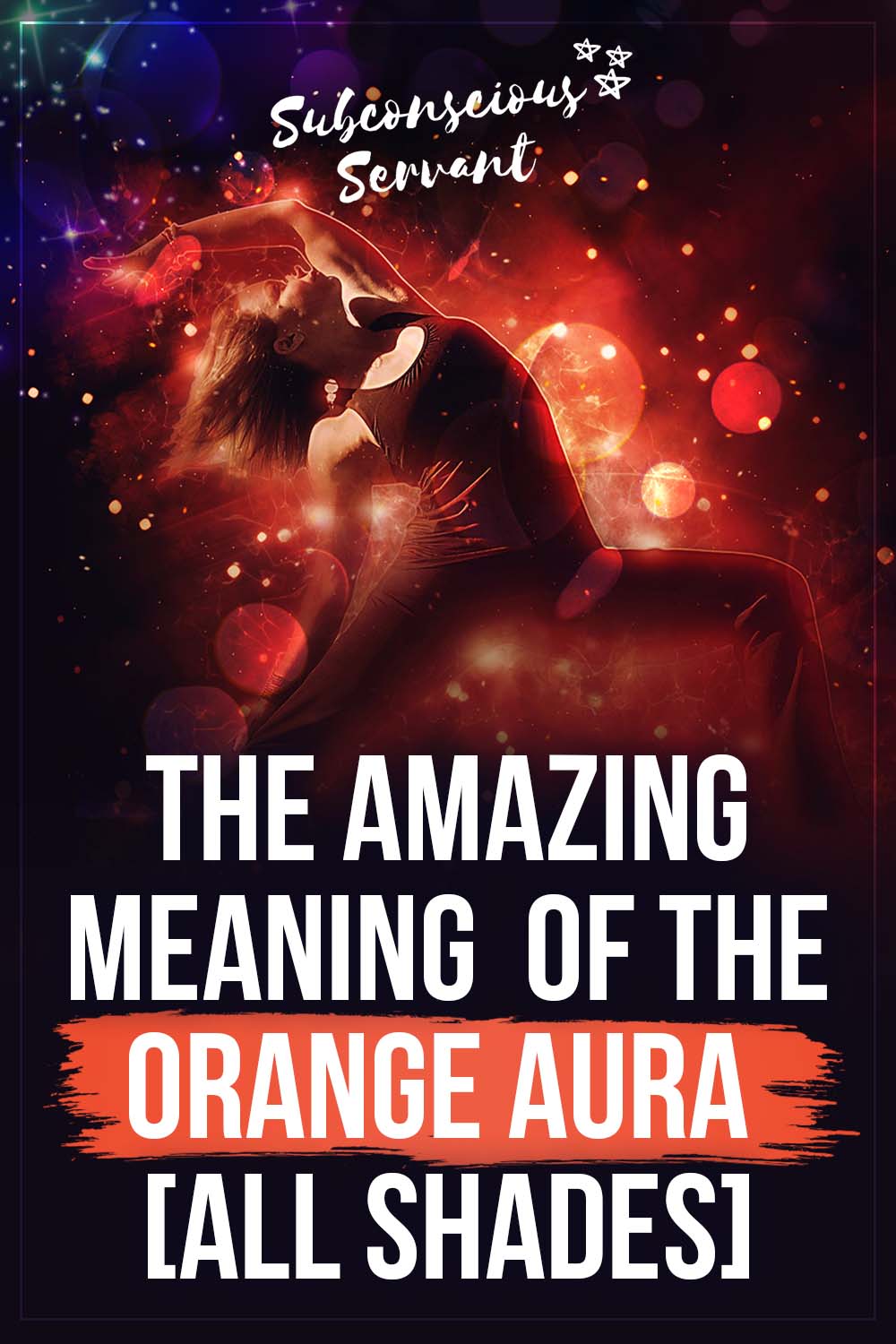 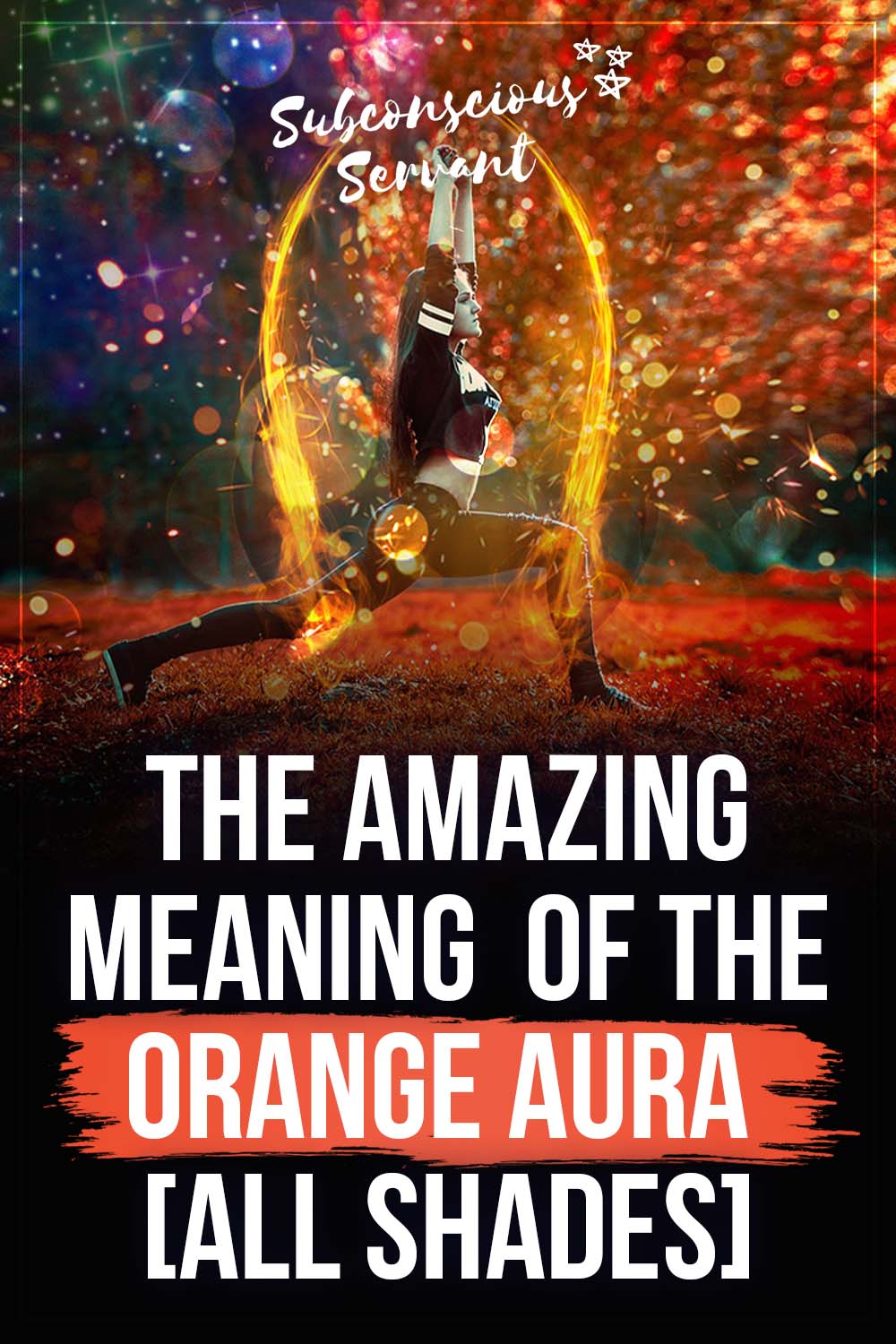 The Powerful Meaning Of Seeing 858